El Meridian is a deep and old yacht scuttled in 2005 to encourage underwater marine live and coral growth.

Just 10 minutes boat ride from the centre, El Meridian is an old yacht measuring slightly less than twenty meters. She was deliberately sunk in the autumn of 2005 as a dive site to a depth of 30 meters on a sandy sea bed next to a rocky reef. We expect over time that a lot of life will flourish on and around this wreck, so there is a lot to look forward to as there are already regular sightings of several species of rays and numerous fish.

Due to the square profile and depth of this dive, this is suitable for advanced divers only but makes for an excellent Nitrox Dive. On air your bottom time is only 20 minutes, but on Nitrox 32 it is 30 minutes. 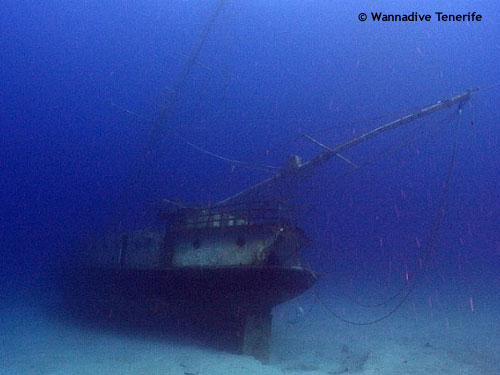 Visit our partners! Or become one.

Atlantic Divers Tenerife, one of the largest scuba diving centres in Tenerife. A

This was more then a yacht. It was used as a German minesweeper during WW2, and was also rumoured to of been Hitlers personel yacht for a few years. Hence the masts that are hinged to allow to go under bridges. The Spanish commandered her after the war, where after she made her final journey to Tenerife.