Caves and Tunnels is an area with the South Cave Rock, Cave of the Chapel, Cave or Rays and a chimney.

This area is home to several different caves and tunnels. Just south from the beach you will find the South Cave Rock Tunnel which is very easy to dive through for experienced cave divers. In a depth of 8 m we dive through a big boulder and through a broad and partially shallow tunnel. You won't feel confined, because there is always light to see on one of the sides. Nature has built us a fantastic lava tunnel, which can be passed without danger even by not so experienced divers. The tunnel is about 15 meters long, between ten and fifteen meters deep and with both exits open and quickly reached. On our way to and from we are going to inspect the many crevices and overhangs and let us be surprised by what Neptune has organized for us.

Other caves and tunnels in the area are the canyon with a narrow chimney cave, found between some deep clefts in the rocks. There one dives into a cave and leaves it through a chimney whose exit is at five meter deep. The cave of the rays has a broad entrance near the beach, which becomes very shallow and sandy the farther you go. The cream piece of all is the cave of the chapel. There exists a guiding line in the 70 m long cave with sandy bottom and soil in between. The entrance is in a depth of seven meters ending up in two rooms and admires the altar, a ledge in a pitch-black cave. 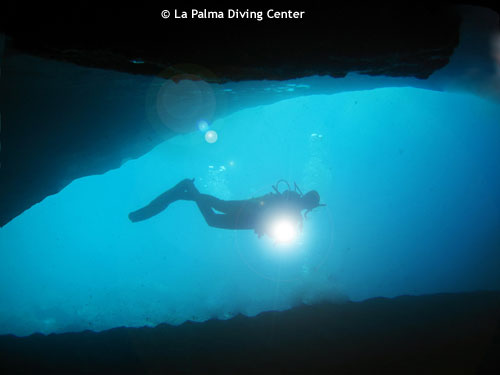